If there's one thing that's holding back wide-spread acceptance of Linux on the desktop, it's the lack of a consistent application installation approach: in my opinion, that's the Achilles Heel of Linux.

The problem is there are several different installation packages (called package management systems) for the different flavors (distributions) of Linux. There's the deb package manager called dpkg, apt (used with dpkg), rpm, yum (used with rpm), and others, and they definitely are not compatible. Not only that, you've got to be really careful (read that as "know some of the internals of Linux-land") or you'll get screwed like I just did.

I'm using Dropbox (great product; more on that on another post - the free version allows you up to 3Gig of storage which is perfect for me) on my machines (Mac OSx and various flavors of Windows) and wanted to add it to my Linux box. I head for the Dropbox site, find the Linux download section and see all kinds of Ubuntu downloads. Now I'm on Kubuntu and I don't see anything specifically saying Kubuntu, but they've got a download that matches my version (9.04) so I give it a whirl.

First, I add it to my apt source files, which entails editing a file called "/etc/apt/sources.list or equivalent" (note the 'equivalent' part -- I still don't know what that could be). However, I've learned how to edit my sources.list file so I go ahead and do that using sudo (setting myself up as super user). The Dropboxers have done a nice job of listing all the options for the various flavors of Ubuntu and Fedora, another Linux distribution. Notice that there's a certain degree of special knowledge required already.

Once I've done that, I try to find Dropbox as one of the applications and it's not there; I try several things and nothing works. (By the way, this is a common occurrence when I try to use apt on my machine).  I do some searching on the web and locate the information about how to use the deb package manager and run that command directly per the instructions. This takes several iterations because the Dropbox software has dependencies (i.e., other software packages that it needs to run) and those software packages have their own dependencies... I slog through this morass and get to a place where it lists a slew of dependencies and says to run it all with specific options and I do that (there's the Big Mistake).  Everything is reported as "fine" and the installer requests a reboot to finish the installation. No problem, I think.

By contrast, the installation for both Windows and Mac was a complete cake-walk: download a file, run it, and done! (As an aside, notice all the Linux  terminology links I had to create just to talk about this subject!)

Now any Linux geek will likely proclaim: "You should have known better" -- and they may be right. But that only serves to prove my point: there's too much knowledge required to do a simple installation on a particular flavor of Linux to expect just anyone to be able to use the operating system productively.

Those same Linux supporters (I do count myself as one... I mean, I am running a Linux box because it gives me greater development capabilities beyond what I can find on Windows and even the Mac platform) may also point out that "Normal users won't be trying to install Dropbox on their machines" -- and they may be right. But the range of what "normal users" are trying and expecting these days is expanding greatly, so the Linux community had better get ready to deal with it.

As another example which most certainly applies to "Normal users", I cannot get the latest version of Firefox installed on my Linux box without resorting to source code compilation, and if anyone in the Linux crowd expects "normal users" to jump into that frying pan, they're just asking for more trouble. I know I won't try that route anytime soon.

I don't know what the answer is. I do know that's it's a complicated task because of all the different distributions there are and the amount of investment in what already works for certain groups.

Nothing frustrates me more (well... only a few things :) than a software developer taking away an option and not providing a way to undo that change, particularly when it is or should be a user choice.

Case in point: Microsoft came late to the security party and when they finally realized that their software was riddled with security holes, they took a rather heavy-handed approach to "solving" the problem. As everyone knows, email allows attachments, which are a great thing for sending files of various kinds to your friends, co-workers, and clients. That's great, but the bad guys figured out ways to package malware into various file types, including such things as Microsoft Access databases (.mdb), web address files (.url), and even compressed files (.zip).

What did Microsoft do? They dropped in a security "fix" that completely disallowed these and many other potentially harmful file types. And the didn't provide a way to undo (either temporarily or permanently) these changes. Once you've installed the security "fix", those attachments are completely inaccessible to you through Outlook. To gain access to them, you have to have another email client handy and that's a real PITA.

Unfortunately, I occasionally get such files from clients or associates whom I trust and I need to be able to open them... Uh-uh. Microsoft knows better than me and won't let that happen.

Today that problem bit me again and I found a terrific resource on the web that allowed to me take care of that in a very intelligent manner.  A quick Google search turned up this page, which explained the situation nicely and then offered up a veritable smorgasbord of solutions. As always, there's a way to edit the Windows Registry

In the "Tools" section, you'll find an Attachment Options link which offers an Outlook plug-in (or COM add-in) by Outlook MVP Ken Slovak. This does everything that Microsoft should have done. It installs quickly and easily, and adds a tab to your Outlook "Tools | Options" window. 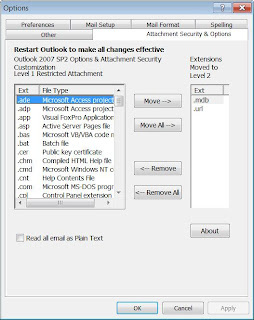 There you can see all the file types that are disallowed, and allow them, individually (or all at once if you like to take risks). Even better, once you've downloaded a particular file that you were expecting, you can easily go back to this tab and disallow them again, so you don't accidentally allow the bad guys to get you.