Oh, you wonder where the disk space went...

Discovered this morning that my Vista machine (business accounting) which is a very low-use machine was generating an overly large backup (55Gig)... and it just seemed to keep growing and growing...

I did some digging and found that the c:/windows/system32/config/RegBack directory was over 7Gigs of space! 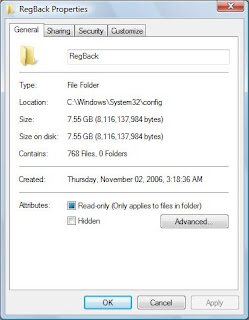 Looking at the files, it's clear that some process is regularly creating backups of the registry 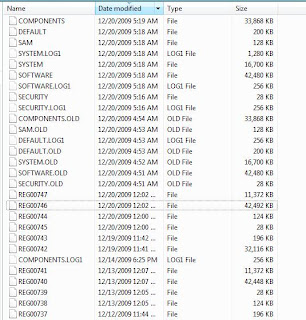 and they just sit there, building up over time.

I know that disk space is cheap, but that's not the only resource involved with simply letting applications use as much disk space as they want. As the size of "stuff" on the disk grows, there's also a cost in other ways.
I wonder if these registry backups are ever used. And I'll bet that the programmers who put this together said to themselves: "Well, it's only a few Megs and disk space is cheap, so we'll just throw these out there in case we need them..." and didn't think about the fact that, over time, these 'few Megs' could turn into a real waste.

Nice idea to back things up automatically, but a little thought to the potential impact of such an approach and some automatic cleanup would definitely make for a better solution. Kinda makes you wish for a variation of the IBM System/360 Generation Data Groups where the operating system would keep a set number of files in a group, automatically re-numbering them as new ones were added.
Posted by JESii at 5:55 AM