When is good audio quality not enough...

When it's combined with poor mechanical quality, that's when.

A few months ago I bought a BlueAnt bluetooth headset (The Z9i model) on the recommendation of a friend who works at Radio Shack. After the purchase, I called my wife to get a quality check (she is very particular about call quality and immediately lets me know what she thinks about the sound) and she gave the BlueAnt a Thumbs Up.  Sounded good to me as well, so I used it for several months and was happy with it.

After only a few months, I learned that the mechanical design / implementation leaves a great deal to be desired and I've replaced the BlueAnt with a Motorola headset.  The problem with the BlueAnt is the mechanism they used to attach the ear loop to the headset. There's a little rubber "grommet" on the back of the headset and the end of the ear loop is inserted into that grommet. That was fine initially, but after only a few months of use, the rubber grommet expanded allowing the ear loop to rotate in the grommet so that the headset flip-flops on my ear. Not acceptable -- it feels as if the thing is going to fall off every time I lean to the side..

I tried applying a very low-tech fix: wrapping a small amount of scotch tape around the end of the ear loop. 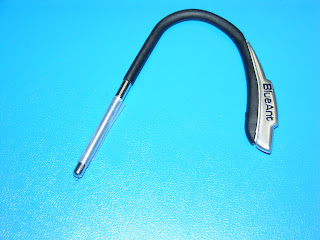 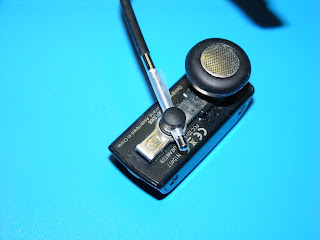 That worked for a while, but when I had to add the second layer of tape because the grommet had expanded even more, I gave up.

Nice of BlueAnt to try new approaches, but this one sure didn't work. In spite of the great sound quality, this device gets a Thumbs Down rating.
Posted by JESii at 8:29 AM